via Diccon Hyatt/ US1 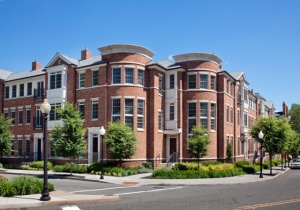 Population. Palmer Square, with just 100 dwelling units in the newly completed Residences section and 124 units — mostly smaller ones — in the original 1930s development above the retail stores, will comprise just a small fraction of the Princeton population. But those folks will be surrounded by good company. The former Princeton Borough and Township, recently consolidated into one municipal entity, had a combined 28,572 population in the 2010 census.

The former Princeton Borough was one of the wealthiest locations in the state, according to the 2010 census, with a median income of $104,000.

Property Taxes: The average Princeton homeowner pays about $15,000 a year in property taxes, according to the state Department of Community Affairs. The taxes on one of the recently sold Residences at Palmer Square, priced at the low end of the scale, were just over $18,000.

Transportation: The whole point of living in Palmer Square is that most things you would want to go to are within walking distance — except a full-service supermarket. But a specialty market, D’Angelo Italian Market at 35 Spring Street, can be counted on for the emergency carton of eggs or quart of milk.

Even though Princeton University’s new arts neighborhood adjacent to McCarter Theater has forced the relocation of the Dinky train station 400 feet further away from Nassau Street, it is still within walking distance. Once there the Dinky is a link to the railroad’s main line and, yes, the world.

Inevitably, though, a car will be a necessity in a town like Princeton. The Residences at Palmer Square all have either direct access to a parking garage, or elevator access. Parking itself is another added cost: $170 per month.

Dining. Palmer Square and nearby Witherspoon Street is one of Princeton’s two restaurant rows (the other is four blocks east on Nassau Street, a short walk). Right next to the square, on Witherspoon Street, is the Witherspoon Grill, Agricola, Mezzaluna (a BYOB venue), and the Alchemist & Barrister. An Indian restaurant, Masala (also BYOB), is located just a few doors up Chambers Street from the front doors of the new Residences units.

Such is the draw of Palmer Square as a dining destination that Steve Distler, the owner of Mistral, the new tapas-style restaurant on Hulfish Street at the corner of Witherspoon, is now considering relocating his highly acclaimed Elements restaurant from its location on Bayard Lane (a drive away) to a space next to Mistral, putting it all into one very walkable location.

Entertainment. High arts and culture are always on display at the McCarter Theater, also within walking distance. There is no escaping intellectualism even at the movies, since the town movie theater, the Princeton Garden Theater on Nassau Street, tends to play films that do not feature giant robots or talking animals. (It is currently showing “12 Years a Slave” and two different indie movies about Palestine.)

Two of the town’s most vibrant cultural hubs, the Arts Council of Princeton and the Princeton Public Library, are virtually across the street from the Residences at Palmer Square.

Education: While most of the residences in Palmer Square were not designed with children in mind, those who end up living there will be within a short distance of a wealth of academic possibilities.

Private schools within a few miles include Princeton Day School, Stuart Country Day School and the Princeton Academy of the Sacred Heart, the Hun School, the Princeton Friends School, the Chapin School, the Waldorf School, and the Lewis School. The Lawrenceville School, where Saudi Arabian princes on occasion have sent their children to be educated, is a short drive down Route 206.

The public schools serve about 3,500 students in four elementary schools, one middle school, and one high school. Princeton High’s average SAT scores of 1884 (as of 2013) put it among the top-ranked schools in the state. About 91 percent of graduates enrolled in a four-year college, with another 8.4 percent in two-year colleges. In 2013 the number of students scoring 3 or above on AP exams was 1,173. In 2012 the school had 20 National Merit Scholars and 44 winners of letters of commendation.

According to the district’s website, the student population is so diverse that more than 50 languages are spoken at home including Spanish, Chinese, Russian, French, Korean, German, Polish, Dutch, Danish, Hungarian, Burmese, Hebrew, Arabic, and Vietnamese. Twenty-two percent of the public school’s students claim one of 55 languages other than English as their first language.

All this helps explain why Palmer Square has gone out of its way to market its residences to buyers from abroad, including Asia (see main story, page 32). The builders of the Residences didn’t build it with the Chinese market in mind, but now that it exists, they are certainly going to explore it.

Says Adrienne Albert, CEO of Marketing Directors, the firm marketing the Residences at Palmer Square: “When you see a trend, you jump on it.”