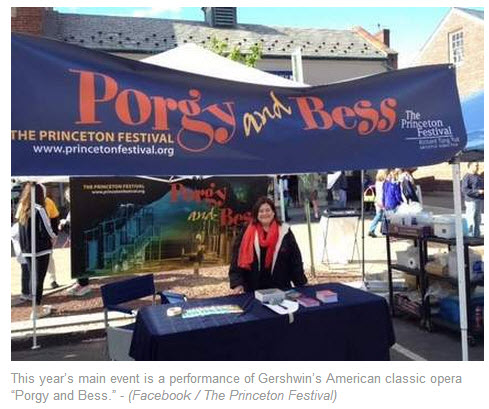 via Meg Fry at NJ Biz

The Princeton Festival, a month-long community-focused cultural festival, has grown from five performing arts events in 2005 to 37 events in twelve genres in more than 10 different venues in 2013.

Last year, the festival was awarded the coveted Citation of Excellence from the New Jersey State Council on the Arts.

And “unlike most other nonprofits in this field, The Princeton Festival has no debt and has balanced its budget every year,” said Richard Tang Yuk, artistic director and general manger.

“When creating a budget, we have to project in all categories what we expect to raise,” Tang Yuk said. “We tend to be conservative in our estimation and hope for something better.”

Tang Yuk credits careful monitoring and transparency of all expenditure with the financial success of the annual festival.

“We do not rely on money that we don’t have a high probability of getting,” Tank Yuk said. “If we’re applying to a foundation that has never given us a grant before, we don’t count that (in the budget projection).”

The Princeton Festival also interacts with the community by partnering with local youth and adult ensembles and engaging students through free educational programs.

By partnering with already-established arts organizations such as JazzNights, Concordia Chamber Players and The Greater Princeton Youth Orchestra, The Princeton Festival is able to share the expenditure and revenue.

“If we had to produce everything ourselves, it would cost more money and would be high-risk,” Tang Yuk said.

“As the festival has grown and our financials have improved, we try to support the operational side more each year,” said Marcia Atcheson, vice chair of the board.

Festival attendance and participation has grown each year, spurring the board to recently establish an endowment fund.

“We ask people to support us into the future because that is where we’re going to be,” Atcheson said.

Adam Perle, vice president at the Princeton Regional Chamber of Commerce, believes The Princeton Festival contributes to the increase of tourism and spending recently seen in the Princeton region.

“Princeton is way ahead of the curve when it comes to the economic impact of arts in the region,” Perle said. “Studies suggest that visitors for the arts are on the higher end of the spending spectrum. When they visit, they shop at our stores, stay in our hotels, eat at our restaurants, buy our gas and groceries — all of which factors into the economy of the Princeton region.”

According to a 2012 survey conducted by the Arts Council of Princeton, the arts and culture industry in Princeton generated more than $51 million in economic activity in 2011.

And according to an economic impact study published by Princeton Regional Convention and Visitors Bureau in November of last year, tourism expenditures in the Princeton region have surpassed pre-recession levels to generate more than a record $1.85 billion in expenditures in 2012.

The Princeton Festival will run from June 7th to June 29th this year, featuring a variety of musical and theatrical performances and arts-related lectures and presentations. This year’s main event is a performance of Gershwin’s American classic opera “Porgy and Bess.”