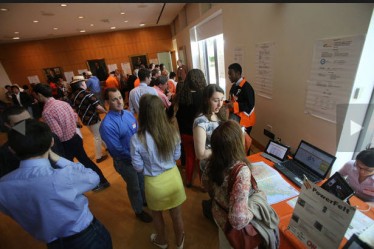 Some business ideas that may catch on big were presented yesterday by would-be entrepreneurs, in pursuit of a $30,000 prize.

There was a cloth-like material that can naturally charge a cell phone or even heat a house, a sticker applied to food packages that will change colors past the expiration date, and there was even an app to give sexual consent to a partner.

These were just some of the business ideas of 40 teams of entrepreneurs who stood in a crowded conference room yesterday and energetically appealed to judges, as alumni, students, families and tourists filled the streets for Princeton University’s reunion weekend.

The event was the 17th annual Princeton Entrepreneurs’ Network Business Plan Competition. All of the entrepreneurs were Princeton University students or graduates.

The winner of the competition — and the $30,000 — was Katie Hughes of International ThermoDyne, who plans to change energy use for all consumers through PowerFelt, a thin, organic material that produces electrical energy from natural heat and motion.

“I am very conscious of the environmental impacts of power generation and I think that there aren’t very many ways right now for regular consumers to not use batteries,” she said. “We are always stuck on the grid, and just looking at this technology, it’s so promising to harvest both heat and motion.”

Hughes’ company is using PowerFelt for several applications, including powering cell phones and laptops, heating homes, improving the efficiency of solar panels, and extending battery life of appliances and tools. Hughes said that the technology could also be instrumental for the military because it could take the place of battery use, which is heavy and unreliable.

When heated or moved, the material produces a charge that can power up a device that uses electricity.

Although the business has patents in eight countries and has garnered the interest of many companies, it still has some hurdles to cross.

“Right now the big challenge that I’m working on is making this in an automated fashion — using machinery to make it,” Hughes said. “To make it by hand it takes a long time, but you have to have that structure to generate energy. I know we’ll figure it out, but right now that’s kind of where we’re at.”

There were many other business ideas yesterday, including cannabis extracts for e-cigarettes, vegetable ice cream, a carpooling company, a tour guide app, and many others.

With a target market of new college couples, Ryan Davies and Billy Klerk developed iConsent, a mobile app that allows users to request and either give or deny consent to move forward in a relationship.

The pair said that the app is not intended to be a dating app, but rather an educational and boundaries-setting tool for college couples.

“We are just trying to facilitate communication and empower good decision making; and whether or not they actually use the app for that functionality is not the core thing we’re going after,” Davies said.

Another green energy business, Solstice Energy, won the People’s Choice Award and was among the judges’ top three choices. Co-founder Conor Godfrey explained that solar energy is primarily available to residents because of its high expense, and his business aims to broaden its availability to renters and lower-income consumers by selling solar power as a retail product to community hubs that can sell it to constituents.

Alanna Gregory also was one of the judges’ top choices with her business, Vive, an online beauty marketplace where stylists and clients can connect to book, schedule and pay for appointments. The business makes a profit by charging a transaction fee on every scheduled appointment, Gregory said.

The judges took their time in selecting the winner, and one of them, Cornelia Huellstrunk, confirmed that it was not an easy decision.

“With the teams, I was looking for passion for the idea, a good team and an idea that’s really dependable in the marketplace,” she said. “There were some really impressive sets of teams with very different types of ideas and all sorts of industries. It was a great experience overall to see all of the enthusiasm.”