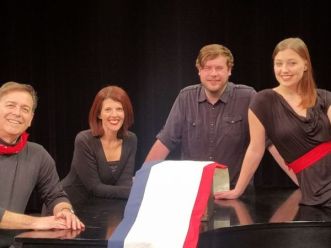 ‘Jacques Brel Is Alive and Well and Living in Paris’ Comes to MCCC’s Kelsey Theatre Jan. 6 to 15

Ring in the New Year with a musical revue that will delight and surprise you – and even offer up some words of wisdom for the times we live in. Pierrot Productions proudly presents “Jacques Brel Is Alive and Well and Living in Paris” at Mercer County Community College’s (MCCC’s) Kelsey Theatre Fridays, Jan. 6 and 13 at 8 p.m.; Saturdays, Jan. 7 and 14 at 8 p.m.; and Sundays, Jan. 8 and 15 at 2 p.m. Kelsey Theatre is located on MCCC’s West Windsor Campus, 1200 Old Trenton Road.

The show features four vocalists ready to make musical magic: Tom Chiola of Trenton, Haley Schmalbach of Marlton, Michael Wemer of Westampton, and Debi Zeontz of West Windsor. Kelsey patrons are invited to join in the lobby before the performances for dessert and coffee/tea. (Note that this show replaces “Billy Elliot,” which has been rescheduled for next season.)

Often referred to as the Bob Dylan of France, Jacques Brel was a prolific Belgian singer, songwriter, actor and director who composed and performed literate, thoughtful, and theatrical songs that generated a large, devoted following – initially in Belgium and France, and later throughout the world.

The show, a blend of ballads, tangos, boleros, rock and classics, pays tribute to Brel’s unique genius. Telling stories about people actively questioning their own values, each number takes on a potent theme: love, war, adventure, broken dreams, class in society, being young and growing old. And throughout, Brel finds ways to treat his subjects with humor and irony. Kelsey patrons are likely to recognize many of these tunes, which have been performed by some of the 20th century’s greatest artists including Johnny Mathis, Frank Sinatra, Ray Charles, Judy Collins, David Bowie, Leonard Cohen, and more.

The show originally opened off-Broadway in 1968 at The Village Gate Theatre, where it ran for four years, and then spawned international and regional productions, as well as a West End production and Off-Broadway revival. A film adaptation was released in 1975. Brel’s songs were translated into English by Eric Blau and Mort Shuman, who also wrote the story.

Tickets are $20 for all and may be purchased online at www.kelseytheatre.net or by calling the Kelsey Box Office at 609-570-3333. Kelsey Theatre is wheelchair accessible, with free parking next to the theater. For a complete listing of adult and children’s events, visit the Kelsey website or call the box office for a brochure.